What is it about?

For music to sound punchy and not fuzzy even at low volumes, all parts of the frequency spectrum must reach the ear at the same time. In practice, this is often not the case because, for example, the front speakers are a few meters closer to the listener than the subwoofer: The bass (from the subwoofer) therefore arrives at the listener somewhat later, since the sound has to travel a further distance. Even at the same distance, such delays can occur: The air in the listening room or in the bass reflex box first swings up a bit, which means that it takes a few ms until the maximum sound pressure is reached. Subwoofer Optimizer hilft, geeignete Aufstellungen und Einstellungen zu finden, um das zu kompensieren.

User guide for the app

The subwoofer should be set up and configured as well as possible. Better starting conditions are more likely to lead to a good optimization result.

It must be clarified how the "Delay" control is operated. Even entry-level receivers offer such setting options: often not as "delay", but as "distance". If this setting is increased by 1 m, for example, the subwoofer is supplied with the sound signal correspondingly earlier (approx. 3 ms). This is to compensate for the time it takes for the sound to travel the longer distance to the listener. The goal is that the sound arrives simultaneously with the output of the other speakers. Caution: The time alignment of picture and sound in A/V receivers is also often called "delay" and has nothing to do with this.

Once the setting options have been clarified, you can begin:

The lower curve shows the frequency response. Noticeable peaks are most likely audible as unpleasant room resonances and should therefore be corrected with Hifi-Apps Speaker Setup. In home audio, peaks with 10 dB above the average is often considered just acceptable, although the demands are very different. To detect such irregularities, no measurement microphone is required. The inaccuracies of built-in microphones usually extend over several octaves, i.e. they have a much "softer" shape than typical room resonances.

After this correction, another new cycle can be started. The phase should also be readjusted again, if such a controller is available. Unfortunately, there is no patent recipe for estimating whether this is worthwhile. In the professional audio field, automated measurements are made in an endless loop while the delay control is is adjusted [Goertz 2020].

Interpretation of the Group Delay curves

The first result is a text with recommendations for the delay setting. This should only serve as a first orientation: much more information is contained in the plots for group delay and frequency response.

The upper plot (group delay) shows at which frequencies the signal arrives with how much delay. Larger y-values correspond to longer propagation times. In the following example two mid-range speakers (Quadral Chromnium Style 50) and two subwoofers were used with a Denon receiver. 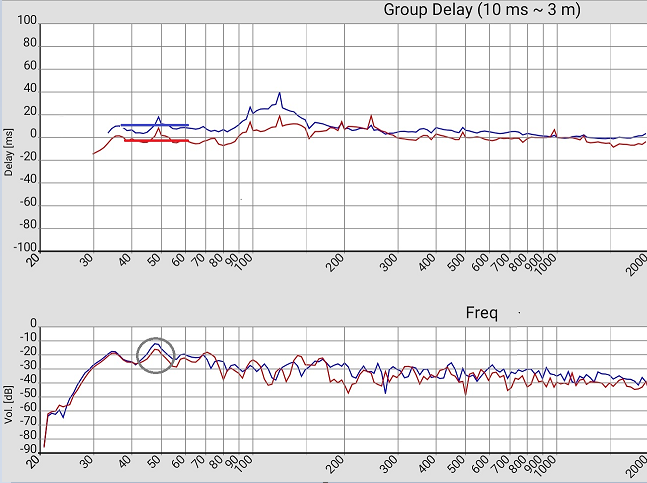 In both diagrams, 2 straight auxiliary lines have been drawn by eye for illustration, to indicate a balanced relationship to the higher frequencies. More accuracy is not required, the hearing threshold (at these low frequencies) is 10 to 20 ms. The measurement on the left provides acceptable values with a little good will, since (almost) everything happens in such a range. The curve on the right was measured after the "Distance" setting in the receiver was reduced 3 meters. You can see that the bass range is raised by about 10 ms (=arrives later) and thus harmonizes better with the right part. Thus the correct adjustment is found sufficiently exactly. The "humps" from about 100 Hz are probably a result of room resonances. As described above, this should be addressed in the next step.

The lower curves "Freq" show the (basically much more important) frequency responses. You can see that the subwoofers are set too high: The left part of the curve is higher compared to the right. It should also be checked whether, for example, the resonance at just under 50 Hz (gray circle) can be eliminated.

For comparison, a measurement with two electrostats (Martin Logan ESL 9) was carried out in a better damped listening room: 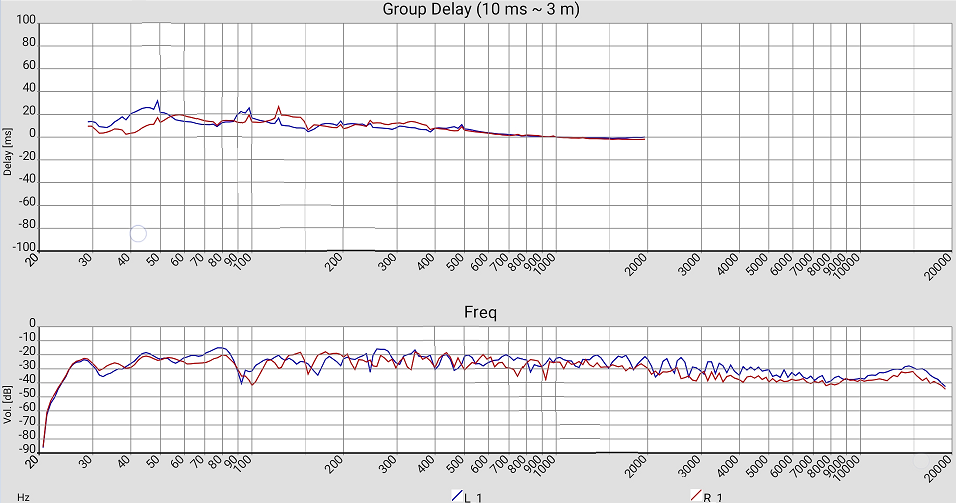 One sees in particular the better time accuracy at higher frequencies, which is probably due to the electrostatic transducers. The image is considerably more balanced overall (left). The listening impression differs accordingly. However, considerable variation can be found here as well (right), if one only looks for long enough, i.e. tries different microphone positions. Conversely, this means that individual isolated humps, which disappear when the microphone position is changed have little meaning. Such places where certain reflected waves "slosh very high" should of course not be located exactly at the listening positions.

The measurements were performed with a measurement microphone, but many findings can already be collected with the built-in microphone of common Android devices. The limits are shown here.

How to correct subwoofer group delay without delay controller ?

In general, you want to shorten the group delay . For common home setups, the first attention should be directed to the listening room: Often, room resonances cause group delays that exceed those of the subwoofers by a factor of 10 or 100. If the room can absorb less energy, the group delay will shorten. In particular, the room modes must be damped, e.g. e.g. by Helmholz or plate resonators. Active damping by several subwoofers (double bass array) is also possible. The more subwoofers are used, the more likely is a favorable distribution of individual resonances and the shorter (i.e. better) the group delay becomes. The group delay of the subwoofers can be reduced by decoupling them at as low a frequency as possible and with a low octave slope. The rest of the speakers should do everything they are capable of.

Better to simply connect in parallel?

With several subwoofers, experience shows that the result improves considerably, if you "simply" set them up well (see link at the beginning of the text) and operate them in parallel, i.e. with the same signal. The calibration is then done analog to the single subwoofer, whereby the effort naturally increases due to more set-up possibilities. Whether further fine-tuning of the individual subwoofers is appropriate cannot be answered across the board. Certainly, it becomes more important when the crossover frequency becomes higher, i.e. the subwoofers take over part of the music reproduction, and less important when they are only there for movie effects. If different subwoofers are combined, significant improvement possibilities also open up according to our own experience. Fast-responding Linkwitz dipoles or small subwoofers, for example, can provide a light and precise sound. For powerful effects, they can be supplemented by deeper-tuned bass reflex boxes. Operating such a system, at least on a trial basis, without electronic control of the individual systems has the advantage, in addition to simplicity, that each subwoofer can be driven at its intended level and frequency range, so that the signal is optimally distributed during loud passages. Also, if the bass signal is distributed to different channels (bass right, bass left), further readjustment would probably only provide random results due to its complexity.

Speaker management systems with 6 outputs, each with separate settings for phase, delay, EQ, limiter are now available for less than 250 EUR (Behringer DCX2496 Ultra-Drive Pro, as of 2021, Currently, 2022, more expensive). A few years ago this was the rental fee per day. With 4 subwoofers that can be moved in 3 spatial directions (with Linkwitz dipoles, rotations for the radiation direction are added) and the mentioned adjustment possibilities, it quickly becomes clear that a fixed procedure scheme, possibly in connection with machine simulations is inevitable. Otherwise the optimization ends up as unsystematic tinkering due to the "curse of the many parameters". The following scheme can help:

An introduction to the theoretical background with further literature can be found on hifi-apps.com here.